Call for Participation: Portrait of 19 Million 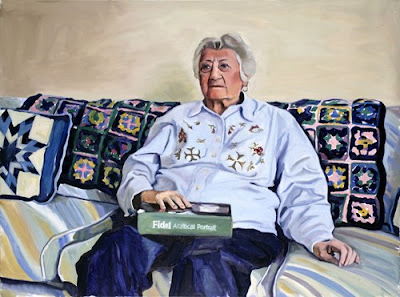 Portrait of 19 million is an open participatory project organized by artist Yevgeniy Fiks. This project will be presented in the Viktor Misiano-curated exhibition, The Impossible Communities, at the Moscow Museum of Modern Art (MMoMA) in Fall 2011.
According to official Soviet statistics, 19 million people were members of the Communist Party of the Soviet Union (CPSU) during the Perestroika period. These were people who joined the Party at different times and under different circumstances. CPSU was not homogeneous with regards to its social make up nor ideology. Who were the members of the Party then? What united them and what could alienate them from each other? Who are they now? Portrait of 19 million focuses on the fates of concrete individuals, using purely artistic and sociological tools in an attempt to understand the Soviet and post-Soviet subjectivity.
Everyone is welcome to participate in this project regardless of profession. Participants are invited to submit a portrait (or self-portrait) of any person who was a member of the Communist Party of the Soviet Union during the last years of the USSR. Age, occupation, social status of the portrait's subject doesn't matter. The portrait can be done in any style and technique: amateur photography, studio portraits, mobilography, video, painting, drawing, collage, etc.
Conditions of Participation
Prospective participants should contact Yevgeniy Fiks by July 15, 2011 at: portraitof19million@gmail.com. Yevgeniy Fiks will discuss with each participant the project details.
After confirming participation in the project, each participant will receive a questionnaire to be filled with biographical data of the portrait's subject. Both the questionnaire and portrait(s) will be exhibited in the form of an installation at the Moscow Museum of Modern Art in Fall 2011.
The names of all project participants will be listed in MMoMA materials. Participants will retain copyrights of their work. All materials will be returned to their corresponding owners.